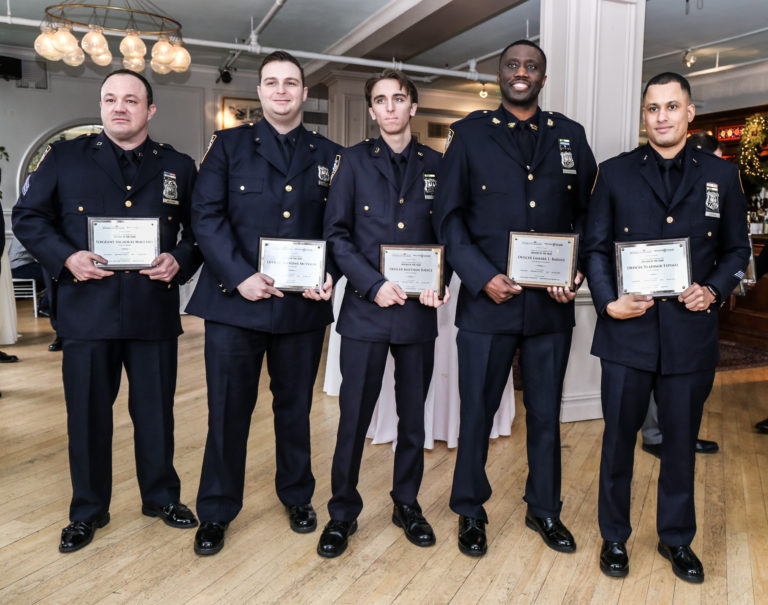 BY TEQUILA MINSKY | Last week, the Greenwich Village-Chelsea Chamber of Commerce hosted its 15th annual Safe City Safe Streets luncheon to honor outstanding officers in local precincts. The Chamber members recognize how important police are for local businesses and residents alike, and this annual event is, in part, a way of showing their gratitude.

Anthony Arias, the G.V.C.C.C. board president, and Maria Diaz, executive director, said, in a joint message, “Each officer and precinct has become a bigger piece of our community, and each year our community becomes a stronger piece of the local fabric that makes New York, New York.”

The Fifth, Sixth, Ninth, 10th, 11, 13th and Midtown South precincts are all located in the Chamber’s catchment area.

Officers and local merchants came together with friends and family of the honorees last Wednesday at Manhattan Penthouse, at One Fifth Ave., at W. 14th St.,

to celebrate the Finest from these New York Police Department precincts.

Chief of Department Terence A. Monahan, the force’s highest-ranking uniformed member, gave the event’s keynote address. A 36-year N.Y.P.D. veteran, Monahan spoke of how in 2014 the department changed its philosophy and created neighborhood policing.

“The same police officers are in the same blocks every day,” he said. “Last year, we had a record low — 300 homicides — in modern recordkeeping. He also noted that business owners and community members share the responsibility of public safety that ultimately fights crime.

The criteria and selection for the year’s Officer of the Year Award honorees were left up to each precinct. The Sixth Precinct’s recipient, Officer Colin Sullivan, was not present last Wednesday because he was on his honeymoon. Sullivan has served in the Greenwich Village precinct’s Cabaret/Conditions Unit, Crime Analysis Unit and Domestic Violence Unit and for the past three years has been its assistant field intelligence officer. 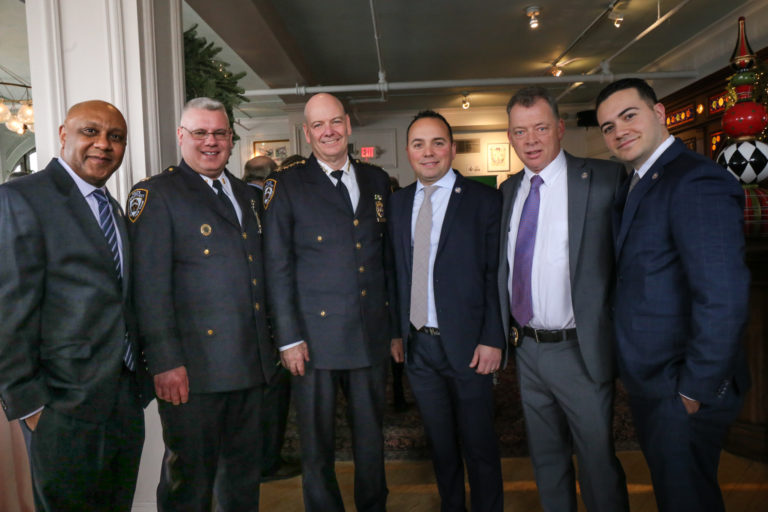 Among other Officer of the Year winners, Officer Vladimir Espinal, transferred to the Fifth Precinct in 2013 and is assigned to the Chinatown/Little Italy precinct’s Anti-Crime Team. He is the recipient of multiple Excellent Police Duty Medals.

Officer Brendan McVeigh has been with the East Village’s Ninth Precinct since graduating from the Police Academy three years ago. Noticing his enthusiasm, his supervisors assigned him into a regular neighborhood sector where he works closely with the precinct’s team of Neighborhood Community Officers, or N.C.O.s He is self-directed in identifying problems and forming solutions.

A 2016 Police Academy grad, 10th Precinct honoree Officer Matthew Iodice heroically rendered aid to a young man whose arm was severed in a vehicle accident. The Chelsea officer applied a tourniquet and his quick actions saved the victim’s life. More recently, Iodice, just weeks after being assigned to the Anti-Crime Team, apprehended a dangerous robber and recidivist burglar, closing out an ongoing burglary pattern in the neighboring 13th Precinct. 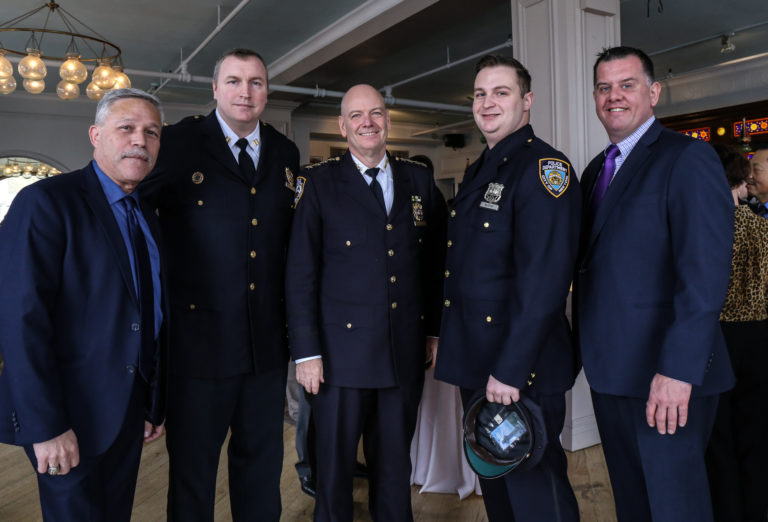 With 14 years on the force, Sergeant Nicholas Macchio was the honoree from the 13th Precinct (Union Square, Madison Square, Stuyvesant Town and Gramercy), the precinct he was assigned to upon his promotion to sergeant in 2011. During his tenure at the 13th, he’s been the Union Square Park sergeant, the School Safety sergeant and he is currently the N.C.O. sergeant.

Midtown South’s honoree, seven-year N.Y.P.D. veteran Officer Lamarr L. Barnes, was described as a beacon of light to his colleagues and the community. He is a precinct N.C.O., and since becoming one, has made it a priority to visit with community members, listen to their concerns and address them. He also has an impressive arrest record.

Alex Hellinger, executive director of the Lenox Health Greenwich Village comprehensive-care center, at Seventh Ave. and W. 12th St., also greeted everyone in attendance and thanked the neighborhood precincts for their work in keeping the communities safe.